Urban GrillerOct 6th 2015+6
Most of us have used our kettles mainly for roasting and grilling. In Australia, the idea of “low and slow” was unheard of until a few short years ago.
Frustrated by the limitations of the little charcoal fences and the two techniques described in the Weber user guide, and armed with some sage advise from some of the good ol boys in the US, we began experimenting with new fire setups.

The Fuse
The “fuse” method (affectionately referred to as the “snake”) is popular with Australian barbecuers wanting to cook “low and slow”.
The Fuse guarantees a stable temperature, is easy to setup, and can be relied on to cook your food while you are off doing other things. The configuration of the briquettes in the fuse dictates the amount of heat and the length gives the duration of the burn.

In this method, carefully lay two briquettes side by side on the charcoal grate around the wall of the kettle. Starting from the end of the “fuse,” carefully place another briquette on top of the two on the bottom, then lean another on that one; continue leaning the top row on the previous briquette all the way around to the start.

This structure ensures that as the fire burns, the lit briquettes will fall towards the unlit ones and not away from them. At the very start of the fuse, leave four briquettes without the top row. This is a kind of launching pad for the lit briquettes to “mount” the fuse and start the whole thing burning. 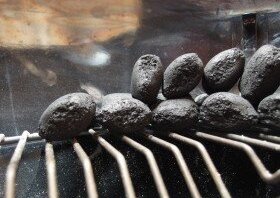 Light half a dozen or so briquettes in a chimney. Once they are burning well, carefully place the lit fuel on the “launching pad.” I have set the bottom and top vents to half open.
It is only necessary to adjust the vents if you are fighting ambient conditions like wind or extreme cold.
Wind will blow through the vents and feed the fire making the fuse burn too fast; closing the vents a little can help, but the only real answer to wind is to find a protected spot to cook. Opening the vents will let the fuel burn cleaner and hotter, which helps combat extreme cold. 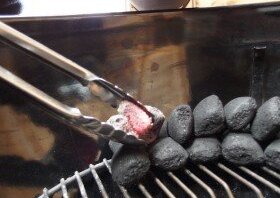 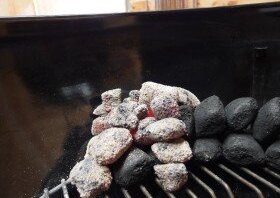 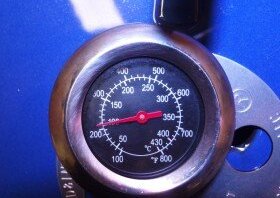 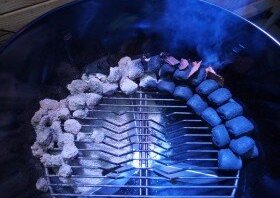 Place some wood chips, chunks, or herbs along the fuse for a progressive release of smoke flavour as the fuse burns.

This site uses cookies. By continuing to browse this site, you are agreeing to our use of cookies. More Details Close